Tuihono UC | UC Online is the online learning division of the University of Canterbury. We're dedicated to providing high-quality online courses for students, professionals, and other lifelong learners.

All our courses are specifically designed for online learning. They're flexible and accessible, making it easy to expand your learning and extend your professional skills

Our expert team of subject matter experts, education developers, student support advocates, and relationship managers work hard behind the scenes to create an effective, productive learning environment for all our learners.

People come first at the University of Canterbury, which reflects our intrinsic values: whanaungatanga, manaakitanga, and tiakitanga. These values are rooted in trust, care, and reciprocity. They were embedded over generations of Ngāi Tūāhuriri and Ngāi Tahu being present in the region.

In 1861, Pita Te Hori, the first Upoko of Ngāi Tūāhuriri, instructed the founders of Ōtautahi: 'Kia atawhai ki te iwi – be kind to your people.' Today, these words underpin the relationships we foster among our students, staff, and community. We're proud to open our doors to students and staff throughout Aotearoa New Zealand and the world. We welcome everyone to learn from each another and contribute to our diverse and flourishing community. The University of Canterbury is a place for everyone.

Doing what is right, being professional, and maintaining high standards.

Being honest, truthful, and acting with integrity

Being respectful, responsive, and empathetic. 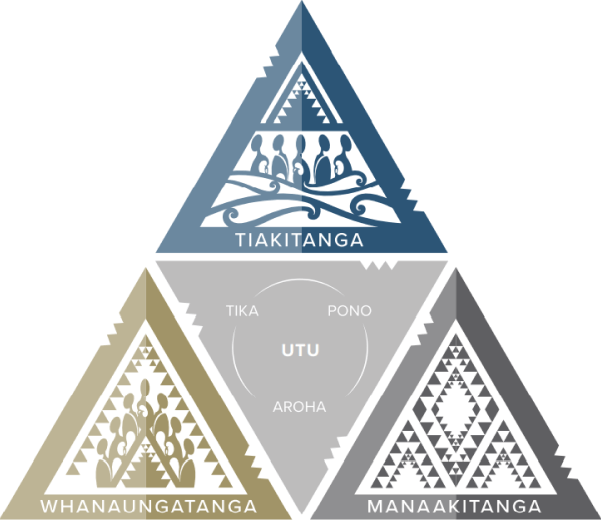 Kia tika, kia pono, kia aroha – doing what is right with integrity and empathy. This is how we check in on how well we're living the values.

At the centre of our attributes is utu – reciprocation and balance. Utu is linked to retaining mana. It recognises the link between actions and reactions – that all actions require an appropriate response, whether positive or negative.

UC’s values were defined by our staff and shaped by a team at Te Waka Pākākano | Office of the Assistant Vice-Chancellor Māori, Pacific and Equity, using a Māori values paradigm and a Māori world view.

Each value was given a whakataukī, or saying, to facilitate deeper understanding. You can learn and practice the pronunciation of each whakataukī here.

Te Whare Wānanga o Waitaha | University of Canterbury was established in 1873. It is Aotearoa New Zealand’s second oldest university. Since its establishment, UC has produced graduates who have gone on to become world leaders in their fields. We are committed to continuing this tradition of excellence and to developing tomorrow’s leaders.

UC was set up on the Oxbridge model with one major difference – women students were admitted from the start. An early graduate, Helen Connon, became the first woman in the then British Empire to attain honours.

Housed in graceful stone buildings on a central city block, the College depended on rent from high country farms endowed by the Canterbury Provincial Council.

Ernest Rutherford, Canterbury’s most distinguished graduate, studied at the University in the 1890s. He discovered his scientific ability during a year of postgraduate research before taking up a scholarship in Cambridge. He went on to win the Nobel Prize in chemistry and in 1917 became the first person to split the atom.

Leader and politican Sir Apirana Ngata (Ngati Porou) was a contemporary of Rutherford and the first Māori graduate from an Aotearoa New Zealand university. Portraits of the two grace the country's $100 and $50 bank notes respectively.

For most of its first 100 years the University was situated in the centre of Ōtautahi Christchurch (now the Arts Centre). It moved to its current location in 1975 – a spacious, purpose-built 76-hectare site in the suburb of Ilam. The new University campus has a central complex of libraries, lecture theatres, laboratories, and student accommodation. It's surrounded by playing fields, woodlands, and the renowned Ilam Gardens.